The Wreck of the Sea Venture 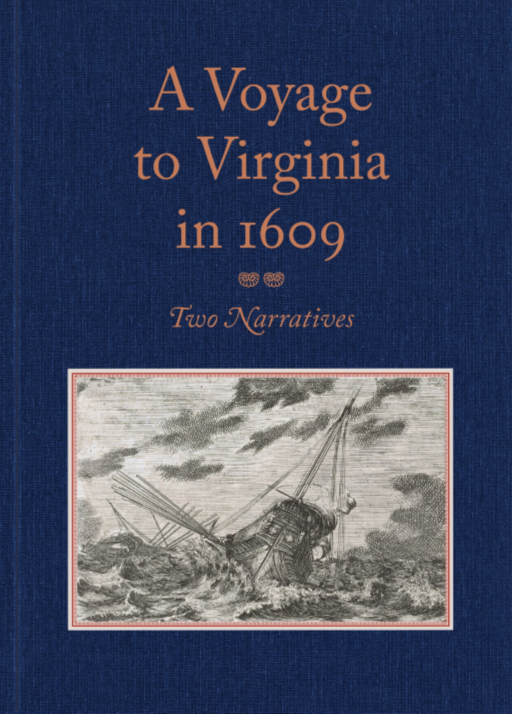 A Voyage to Virginia in 1609: Two Narratives: Strachey's "

True Reportory" and Jourdain's Discovery of the Bermudas.  (Press link to View Downloads)

But see the goodness and sweet introduction of better hope by our merciful God given unto us: Sir George Somers, when no man dreamed of such happiness, had discovered and cried

In 1609 Sir George Somers was made Admiral of the Virginia Company's Third Supply Relief Fleet, sailing from London and then Plymouth, bound for Virginia. The fleet of 9 ships, with Somers aboard the flagship Sea Venture, set sail from Plymouth with fresh supplies and additional colonists for the new British settlement at Jamestown. Also aboard were John Rolfe (who would become known as the husband of Pocahontas) and the governor-designate of the settlement, Sir Thomas Gates. On 25th July during a hurricane, the Sea Venture was separated from the main fleet and was wrecked off Discovery Bay, Bermuda. Somers and all aboard the Sea Venture were presumed dead by those who continued on to Virginia.

Sir George was not dead! In fact, the ship was wrecked between two rocks or reefs and all 150 crew and colonists were saved. This marked the beginning of the colonisation of Bermuda, England's first Crown Colony. At the time Bermuda was known as 'Virgineola' in tribute to the Virgin Queen, Elizabeth I. But with King James I now on the throne, the islands were renamed the Somers Isles, still today Bermuda's official alternate name.
To continue their journey to Jamestown the castaways needed new ships, so Somers and Sir Thomas Gates between them oversaw the building of the Deliverance and the Patience from the wrecked Sea Venture and local timber. There was no lack of food on Bermuda, and the castaways were able to live well on fish, sea turtle eggs, fruit and wild hog (which had been landed and left behind on the islands by Spanish pirates). So during their ten months on the islands, the crew and passengers started the Bermuda colony, building a church and houses.
Ships Lyme Regis plaque (HUK)On 10th May 1610 the two small ships set sail with 142 people and some supplies on board. On arrival some fourteen days later, they found the Virginia Colony almost destroyed by famine and disease during what has become known as the "Starving Time". Very few of the supplies from the Supply Relief Fleet had arrived (the same hurricane which caught the Sea Venture had also badly affected the rest of the fleet), and only 60 of the original 214 settlers remained alive.

Sir George Somers wrote to Robert Cecil reporting his shipwreck on Bermuda while on a voyage to Virginia and telling of a famine at Jamestown so severe that people were forced to eat snakes. He planned to take the colonists by ship to Bermuda "the most plentiful place that ever I came to for Fishe, Hogges and Fowle". However, the plan to abandon Jamestown was shelved upon the arrival of the fourth relief fleet commanded by Lord Delaware in July 1610.
It was only through the arrival of the ships from Bermuda and the arrival of the fourth relief fleet that the colony at Jamestown was able to survive.
Sir George returned to Bermuda in the Patience to collect more food, but he became ill on the journey and died "of a surfeit in eating of a pig", on November 9th 1610 in Bermuda. His heart was buried in Bermuda but his body, pickled in a barrel, was landed on the Cobb at Lyme Regis in 1618. A volley of muskets and cannon saluted his last journey to the church at Whitchurch Canonicorum where his body is buried.

How do we know about the Sea Venture?

The story of what happened to the Sea Venture is known through the work of Sylvester Jourdan, also from Lyme Regis, who was on board the Sea Venture and survived to record what had happened in a small book he wrote in 1610 called A Discovery of the Barmudas which was printed in London.
One of the backers of the Virginia Company was the Earl of Southampton, Shakespeare’s patron, and it is possible that Jourdan’s book about the shipwreck on the mysterious island, ‘the land of devils and spirits’, was the inspiration for Shakespeare’s play, The Tempest.
Lyme Regis is twinned with St George in Bermuda, however, the town is named after St George, the patron saint of England, and not Sir George Somers, founder of the colony of Bermuda.

The Shipwreck That Saved Jamestown: The Sea Venture Castaways and the Fate of America

On April 16, 2009, Lorri Glover delivered a Banner Lecture entitled "The Shipwreck That Saved Jamestown: The Sea Venture Castaways and the Fate of America." The wreck of the "Sea Venture" on Bermuda in 1609 and the role its survivors played in the eventual rescue of the failing colony at Jamestown are dramatic tales from the founding years of the nation.

Lorri Glover teaches at Saint Louis University, where she holds the John Francis Bannon endowed chair in history. She has written extensively about early America, from the seventeenth century to the nineteenth.  In the above lecture, she gives some an excellent background in the context of the 1609 voyage and its importance to our story.   Glover wrote the book 'The Shipwreck That Saved Jamestown: The Sea Venture Castaways and the Fate of America' 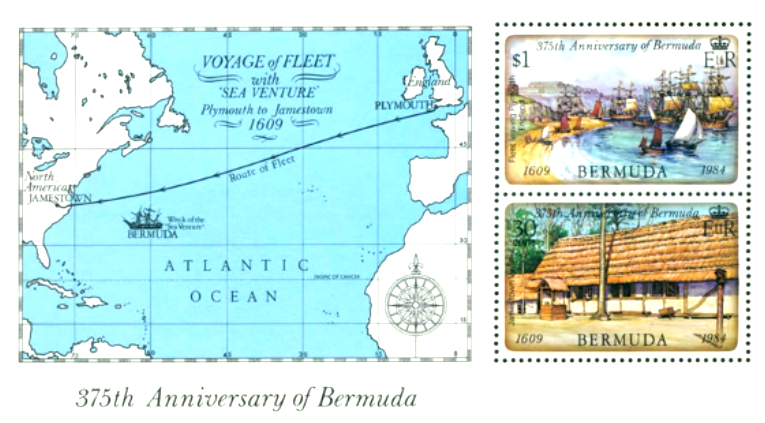 Click on graphic above to navigate the 165+ web files on this website, a regularly updated Gazetteer, an in-depth description of our island's internally self-governing British Overseas Territory 900 miles north of the Caribbean, 600 miles east of North Carolina, USA.

Introduction Sea Venture was an English emigrant ship of 300 tons. On 2 June 1609 as flagship of a fleet of nine vessels Sea Venture sailed from Plymouth, Devon with settlers and supplies for the infant colony of Jamestown, Virginia.

Digging deeper into legend of Somers

In recent years Sir George Somers has become quite a contentious aspect of Bermudian History.  Bermudian MP Rt Hon Christopher Famous sheds some light on the controversial figure of Sir George.  From the article comments below, it is clear to see that not everyone agreed.  This illustrates how perspectives change over time .

Digging deeper into legend of Somers

Sold I to the merchant ships ..." - Bob Marley As someone who has studied many facets of history, there is something extremely wrong when grown persons attempt to rewrite historic facts. A prime example is the following message: "Cup Match is an event which marks the day that Bermuda was discovered by Admiral Sir George Somers in 1609.